You are using an outdated browser. Please upgrade your browser to improve your experience.
by Karen Freeman
August 26, 2016

Apple first released the watchOS 3 beta to developers two months ago. I downloaded it myself then, and while it was exciting to test out the new features, it was pretty buggy at first. Now that we’re currently on the sixth beta and Apple has worked out the bugs, I feel more prepared to answer the big question: does watchOS 3 make the Apple Watch feel like a whole new watch as Apple claims?

In a word, yes. With a small “y.” Basically, watchOS 3 adds nearly everything you might realistically hope for in an Apple Watch update that doesn’t require new hardware. So no, watchOS 3 doesn’t bring GPS or its own cellular service apart from the iPhone. It is still an iPhone accessory, not an independent device. It can’t sense your pulse ox or blood sugar levels. There is no camera, no 100% waterproofing, no thinner form factor. If you need those things for the Apple Watch to feel like a new watch, then you’ll be disappointed.

But watchOS 3 does bring just about everything I personally had hoped to see in a new Apple Watch. My main concern was speed, and watchOS 3 does bring a noticeable increase in speed across the board. Even third-party apps tend to be faster, although that does vary by app. The Scribble feature in Messages just seems to get better and faster the more I use it; it’s both useful and fun. I also wanted fresh new watch faces, and while Apple is still keeping a close grip on the parameters, there are a lot of new faces, variations, complications, and complication spots that I’ve been enjoying playing with. I’d still like to see a totally open market, where developers can create and sell entirely new watch faces of their own design. I don’t know if Apple will ever do this, but I wish they would. 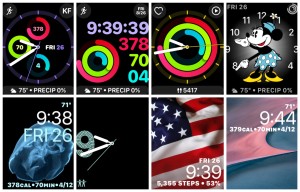 Apple added Activity Sharing, which was a much requested feature, probably due in part to the popularity of FitBit. A big appeal of FitBit is the fact that you can easily compete with your FitBit friends. Activity Sharing allows Apple Watch users to do the same with other Apple Watch users, without having to download a third-party app. With watchOS 3, you can Find My Apple Watch in iCloud. This is a logical feature and much welcomed. Other new features such as the Breathe app, the Dock, Control Center, wheelchair optimization, smarter workout app, HomeKit app, SOS button, and enhanced messaging will mean a lot to many users.

So will watchOS 3 be enough of a jump that you won’t feel a need to buy a new watch when the ‘Apple Watch 2′ is released? Only you can make that decision; personally I need to see what the new watch offers before I decide. We have nothing but rumors and opinions at this point, but we expect that Apple should make an official announcement in the next couple of weeks. I do think that many current Apple Watch owners will be so delighted with the changes that watchOS 3 brings that they will not feel the need to buy the second generation timepiece.