You are using an outdated browser. Please upgrade your browser to improve your experience.
by Andy Faust
March 23, 2015

Ever since iOS updated to version 8.2, folks have been “freaking out” about the “permanent undeletable Apple Watch advertisement” that came along with it. This ad — which is, in reality, the Apple Watch companion app that will go live when Cupertino’s new wearable comes out next month — is being presented as some kind of audacious affront to sacred consumer dignity.

Fie upon absolutely all of that.

Now, I’m no Apple apologist. Yeah, I like their stuff, and I’m about as excited for Apple Watch as I have been for any piece of tech in a really long time, but I don’t consume the Kool-Aid via intravenous drip. When I drink the stuff, I only sip, and I always chase it with a self-administered slap in the face. Basically, I strive to remind myself that Apple is a global brand in the business of selling expensive, high-margin hardware. I further understand that ascribing any kind of socially-altruistic, non-monetary corporate philosophy to Cook and company is perilously naive.

The argument that Apple is somehow morally wrong to use its own platform as an advertising vessel for its own new products holds no merit, because everyone making it is willfully doing so in a self-imposed vacuum where the rules are different for Apple Watch than for anything else across the entire Apple ecosystem. It seems to me that, for these complaints to carry any credence at all, they’d need to be framed as just the latest ongoing outrage in a long history of “unscrupulous” Big Apple behavior.

On iPhone, it goes without saying that Safari is the ad server to beat all ad servers. But browsers are easy targets, and there’s lots more to pick on. Think about it: The App Store app is one giant ad. I can’t delete it, and any time I launch the thing, I’m greeted with dozens of carefully-selected, obtrusively-promoted, for-pay programs I neither want nor need (and, in many cases, can’t actually run in the first place). I have never used iTunes in my entire life, but I can’t delete that, either. Newsstand? All that pathetic nonsense does is link me to an external periodical storefront — a more pointless app there’s maybe never been. And what about iBooks? Do tons of people really read novels on their iPhones? Maybe. But I don’t, because I’ve got an iPad for that. Shouldn’t I be able to remove iBooks from the small screen? Shouldn’t I be able to delete all the ad portals and storefronts I have no intention of using?

If Apple doesn’t want me to, then no, I shouldn’t.

And I don’t care one teeny tiny little bit. I just do what everyone else does: I put each unused, useless, boring stock Apple app into one big folder and move it off the first page of my home screen. Easy peasy. No big deal.

Still, some people out there will make the argument that the Apple Watch app is altogether different than the other aforementioned. They will argue that apps like iTunes and iBooks offer immediate value for every single user, and that the Apple Watch app doesn’t. But that’s demonstrably false: I use neither iTunes nor iBooks. They are literally no use to me whatsoever. And I’m not the only one. If you don’t care about reading newspapers or novels on the small screen, iBooks is 100 percent useless. If you don’t listen to paid music or watch paid videos on your iPhone, iTunes is utterly irrelevant. I even launched that iTunes Radio thing to see how far “free” might get me in justifying the Music app’s non-deletable status, but I was immediately served with — you guessed it — ads. (Unless, of course, I shell out $24.99 for a yearly subscription to iTunes Match.)

As a commercial product, iOS is one of the largest, most pervasive, most effective ad platforms on Earth. Users usually accept this reality without question, except for the rare times when they notice that it’s tied conspicuously (if insignificantly) to some product they either don’t want or can’t afford. Then it’s a massive insult.

And it’s not compelling: 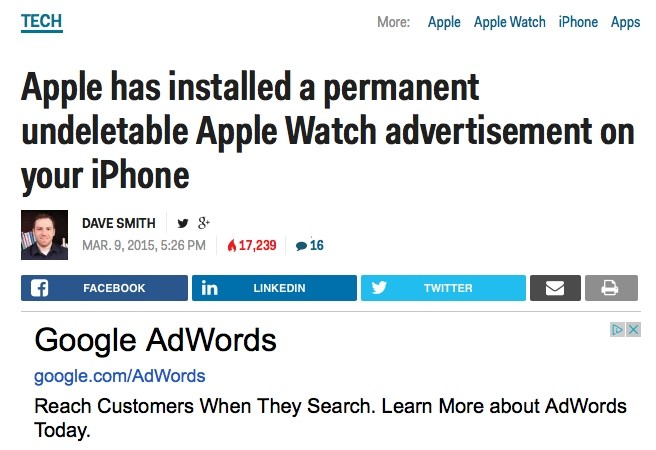 All that said, I reckon the recent inclusion of the Apple Watch app in iOS is a misstep for Apple. Its presence doesn’t bother me, nor does its on-the-surface strategy as place-holding advertisement. And I doubt most folks would argue, once Apple Watch launches on April 24, that iPhone shouldn’t feature this control hub prominently and permanently. I think the app deserves to be showcased on iPhone as boldly as Apple hopes you showcase Apple Watch on your wrist, and Apple should do whatever they can to emphasize this cross-platform system optimization. Such optimization is, after all, Apple Watch’s raison d’être.

But I do think releasing the wearable’s app six weeks out was about five weeks too soon, and I think the thing undermines Apple’s overall bravado a bit. To me, this move’s been done less for ad purposes than as a measure to gauge interest, allowing Apple to get real numbers on real users who actually own compatible iPhones, who reliably update to the latest iOS builds, and who actively use the app in question to watch the videos inside. It’s one thing for Apple to track YouTube views. It’s another thing entirely to analyze system-level engagement from potential customers who already own everything else needed to make Apple Watch work on day one.

It’s just that, even in this context, it’s all totally unnecessary. The interest is there, the hype’s been at a rolling boil for half a year, and initial surveys all indicate iPad levels of awareness and enthusiasm from the general public. For some reason, though, Apple still seems anxious about launch. The Apple Watch app — as it exists right now in its largely needless iOS state — is an admission of uncertainty from Apple. And the worst part? It’s not even the first one.

If you’re committed to feeling slighted by all this, just remember: Apple’s slighting itself even worse. You’d do better to focus your anger on something a little more worthy, like writing to Apple about the offending app’s even more offending icon. That I can get behind.

But getting angry over ads?

Apple is a harsh mistress.