You are using an outdated browser. Please upgrade your browser to improve your experience.
by Abdel Ibrahim
July 22, 2015

Research firm Strategy Analytics has put out a report today showing that Apple has claimed over 75% of the global smartwatch market with the launch of the Apple Watch. The report also shows how much the Apple Watch has hurt Samsung, taking the company from a 73% marketshare down to just over 7% marketshare in just a few months. Strategy Analytics also highlights that year over year growth for the smartwatch industry has grown over 450%. 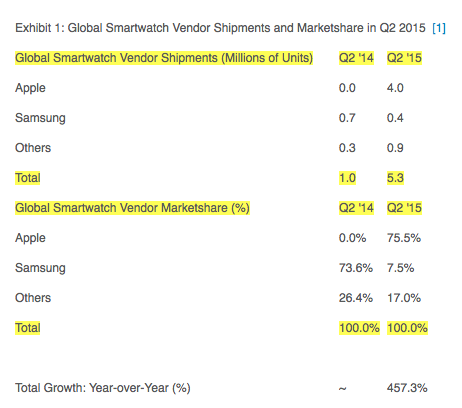 The firm pulls data by looking at Apple Watch shipments to vendors around the world. According to Strategy Analytics, Apple shipped an estimated 4 million units which is roughly what some analysts predicted prior to yesterday’s earnings report.

What’s particularly interesting is how quickly Apple has been able to take marketshare. This is very much like the iPad which also stole marketshare relatively quick and is even considered today, nearly 5 years later, to be the defacto tablet of choice.