You are using an outdated browser. Please upgrade your browser to improve your experience.
by Andy Faust
June 16, 2015

Are you ready for some more so-called Apple Watch “analysis” from the do-nothings of the investment advice world? I sure hope so, because this week’s Excellence In Market Analysis award goes to the fine folks at Pacific Crest for their assertion that iPod is more popular — right now — than Apple Watch. I bask in the glow of its clickbait eminence, and I kneel before its abject disingenuousness. Here’s their chart: 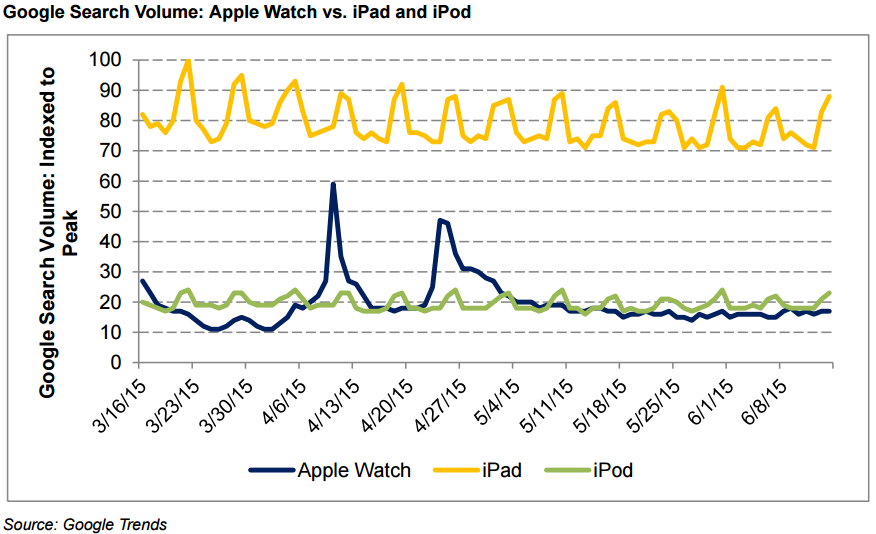 And here’s how Business Insider presents the above:

People are more interested in the iPod — THE IPOD! — than the Apple Watch

Here is a brutal chart for Apple from Pacific Crest analyst Andy Hargreaves.

Like a mindless fish, the chumps at BI haven’t even bothered to look at the source of the data before gobbling down the shiny fake worm: Google keyword searches. Yep, more people have searched for the word “iPod” than “Apple Watch” over the last several weeks, and that, my friends, means doom for the latter. Right?

All it takes is a little context and perspective to undermine Pacific Crest’s entire vapid approach. First, consider the iPod. It has been out, in various forms and at various price points, for almost 14 years. As of 2012, there were an estimated 350 million iPods in private hands, with 100 million of those being fully-fledged iOS-running touch models by Q1 2014 (more sales figures here). Even with declining sales, a conservative estimate puts about 450 million iPods in the wild worldwide. Being more conservative, let’s say half of those iPods are still functional. Being even more conservative, let’s say a quarter of that half are still in actual use. That sounds reasonable enough to me — the iPod has been a popular hand-me-down item in all its iterations.

Now, doing a little math, that puts 56.25 million iPods in active users’ hands today. I’m sure these users do periodic Google searches as their devices age, trying to eke out every last mile from the old tech. (My musician friend still uses a first-generation iPod. Spinning hard drive and all, the thing continues to work, and he’s always researching ways to keep it going.) Compared to the roughly four million Apple Watches out there so far, it’s no wonder that a group more than 10 times larger would collectively type in their keyword a lot more often than current owners of Cupertino’s wearable type in theirs.

And not all searches indicate “interest,” either. “Where can I get my iPod touch screen repaired?” and “Will the gen 4 iPod run iOS 9?” do not represent the same desire to purchase a new product that searches for terms like “Apple Watch shipping times” or “Space Black Apple Watch price” do. Yet by using just the trademarked product names in a vacuum, they’re weighted equally in Pacific Crest’s presentation.

At least we at WatchAware aren’t the only Apple outlet to call shenanigans on this nonsense. Cult of Mac pretty well eviscerated the analyst firm’s methodology, too:

There are plenty of reasons customers might be searching for the iPod on Google, and it could have as much to do with recent headlines about the device’s demise as it does with customer interest in buying one.

Meanwhile, Apple Watch, having spiked in the few weeks before and after launch (duh), is still trending upwards, and it’s on pace to be Apple’s fastest-selling debut product in company history. Plus, check out how long the iPhone — the world’s best-selling anything ever — took to get going after its own launch. It was a heck of a lot flatter for a heck of a lot longer than Apple Watch has been so far: 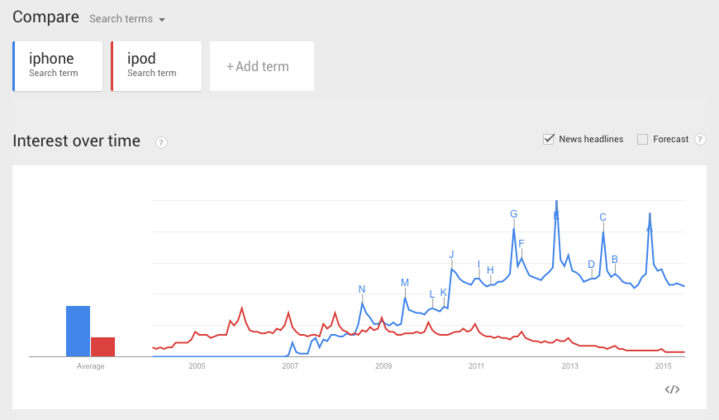