You are using an outdated browser. Please upgrade your browser to improve your experience.
by Andy Faust
May 3, 2015

[The Apple Watch] is, at present, perhaps the most expensive pedometer on Planet Earth. …

If I ran long enough, the Apple Watch did eventually catch up to my actual heart rate during hill sprints (in gym testing), approximating my heart rate at near 180 beats per minute. But as soon as I started drifting, the iPhone couldn’t tell me that I was going too easy. In fact, to take the picture below, I had completely stopped running — but Apple’s heart-rate monitor didn’t know that. 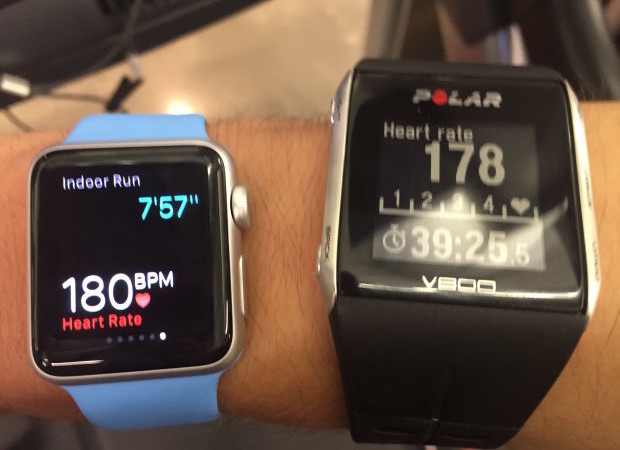 Far from the indictment thet Ferenstein imagines the above image is, I think it’s a major selling point for the 99 percent of potential Apple Watch customers who aren’t, as Ferenstein calls himself, hyper-athletic “quantified-self enthusiasts.”

Most folks aren’t going to push themselves anywhere near their maximum heart rate in the gym, and walking or light jogging or even basic, steady, marathon-style running won’t push their hearts — or Apple’s heart rate sensor — anywhere near 180 BPM.

And just for context, the Polar readout he’s comparing Apple Watch to is fed from a chest strap using medical-grade electrical impusle metering right near the heart, not optical sensors at the body’s extremeties. Given all that, I think a margin of error of two (or even 10) BPM over brief windows of altered activity is nothing to sneeze at. Indeed, Ferenstein’s complaints seem based entirely on the lack of comparative immediacy of Apple Watch’s heart rate measuring, as he claims that the wearable did “eventually” catch up with his workout to provide accurate numbers.

For anyone but the most hardcore number-crunching gym rat (and for the record, I used to be one — I own three different Polar heart rate rigs myself, and my lifting coach is a former Olympian), Apple Watch is perfectly sufficient to provide an accurate — and, even more importantly — trend-trackable workout analysis. And that’s the key. Consider: Your iOS-connected Withings scale might be off by a couple of pounds, but it’ll work just as well as a newly calibrated unit to tell you how much weight you’ve gained or lost. Apple Watch is like that.

And I think that kind of individualized trend monitoring is where the thing’s headed for more than just heart rate.

For dedicated, statistics-focused, near-pro-level fitness devotees, Apple Watch won’t replace Polar’s or Garmin’s top-of-the-line gear. And that gear isn’t cheap, though it is mostly one-dimensional. You won’t be taking phone calls or composing texts with it, and you certainly won’t be able to install thousands of apps to expand its utility. Fitness tracking is what that stuff does, but that’s all it does. On the other hand, Apple Watch doesn’t require an uncomfortable chest strap you have to wear under your shirt, and its so useful that — for millions of buyers — it’s fitness functions will be an afterthought.

But once folks realize that their Apple Watches — which they love for so many other reasons — can also quantify and track a moderate workout to provide that bit of extra motivation for first-timers and one-time-a-weekers to step into the gym, they’ll probably get much more of a life-changing experience out of their wearables than Ferenstein ever got out of any of his.