You are using an outdated browser. Please upgrade your browser to improve your experience.
by Andy Faust
March 5, 2015

For the last couple of weeks, there’s been no slowing the doom-and-gloom set with their apocalyptic prognostications of Apple Watch epic fail. Some folks say the wearable is the bitter swan song of old guard Jony Ive, while others indicate that it’s just a generally needless device born of too little vision and too much compromise. The latest complaint — on top of the oft-repeated battery “problem” and standalone cellular “issue” — comes in the form of that endlessly-echoed Daisuke Wakabayashi Wall Street Journal reveal:

When Apple Inc. started developing its smartwatch, executives envisioned a state-of-the-art health-monitoring device that could measure blood pressure, heart activity and stress levels, among other things, according to people familiar with the matter.

But none of those technologies made it into the much-anticipated Apple Watch, due in April. Some didn’t work reliably. Others proved too complex. And still others could have prompted unwanted regulatory oversight, these people said.

Naturally, the blogosphere was quick to pick up on this perceived major shortcoming, framing Apple Watch as an ambitious blunder that’s doubled back to fill out some worst-case Plan B in the hearts and minds of Apple executives — and now customers — everywhere. The naysayers and critics were only too willing to use those questionable (and perhaps planted) revelations as a bona fide foundation for their argument re: exactly why Apple Watch will never live up to its potential. And the claims, as laid out in this case by the New York Times, sound damning indeed:

Nearly two years ago, [Apple] experimented with advanced health monitoring sensors that tracked blood pressure and stress, among other variables. Many of those experiments were abandoned more than 18 months ago after the sensors proved unreliable and cumbersome…

See? Apple gave up a long time ago. When the technology wasn’t ready, they tucked tail and ran from all their hifalutin delusions about what the product should be. Instead of the world-beating health suite these critics say is now permanently shelved, you’re getting a pedometer, a calorie counter, and a heart rate monitor.

Big whoop, right? I mean, these things are a dime a dozen. Polar’s been making them for a decade, and every fitness tracker this side of the last couple years has them playing back and center. The tech’s available, cheap, not terribly unreliable, and small enough to slap into any wearable worth its salt (ostensibly from your sweat). So why is the Apple Watch heart rate sensor so big? And why is Apple making such a big fuss about it?

Because that’s not really what it is.

If it was, Apple would have simply scaled back the size and bumped up their wearable’s battery life. Or perhaps they’d have slimmed the whole package down so it could fit comfortably under the cuff-links of the style-minded business and haute luxury set. (Remember, Apple had a year and a half to make these changes after the sensor’s primary purposes were thrown out the window.) Instead, you’ve got a custom-built module that takes up the entire underside of Apple Watch, making its overwhelming presence felt — literally — on the mobilest of mobile devices. Real estate premiums have never been higher, yet Apple’s dedicated half of this thing’s surface area to a sensor that could easily get away with being a fifth of the size it actually is. Take a look at Apple Watch among its contemporary competition. One of these things is not like the others: 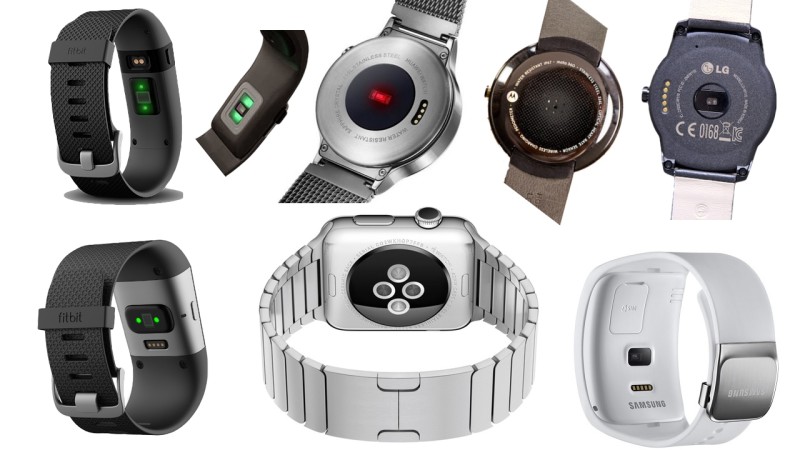 So if it’s not a heart rate monitor, then what is it?

When it comes to the information age hype machine, it’s sometimes ironic that nobody remembers anything past the last few weeks or so. If they did, maybe this 20-month-old bombshell — which goes an awful long way towards answering the question above — wouldn’t have escaped their attention, and they’d be framing Apple’s “abandoned” health features in a far more critical and angry eye. That’s because, if it’s meant to be what I think it is, the implications are life-alteringly enormous:

I believe this thing is primarily intended to be an optical glucometer.

And here’s the best part: As groundbreaking as that development would surely be, Apple wouldn’t leave well enough alone. If the sensor can be made to gauge the levels of glucose in the blood, what else could it do? In this context, pulse oximetry seems a foregone conclusion, as does — with enough mined data from the population at large — blood pressure and stress level metering. What about BAC? Could Apple Watch tell you when you’re okay to drive? Maybe it might even track nitrogen levels, letting the workout wonks among you (formerly among us, but I gave that up) examine exactly how effective a given post-gym protein shake actually is. These might be tough nuts to crack, but the fact remains that they are nuts to crack.

Yes, I’ve heard all the same excuses you have. I’ve heard that melanin levels differ so drastically person to person and region to region that the technology couldn’t be dialed in. But then I wonder why Apple Watch includes four huge LEDs instead of the industry standard tiny one or two. I’ve heard that “hairy arms” are a similar hurdle to making this thing work. But then I simply point out that the underside of one’s wrist is usually quite bald. I’ve heard that “dry skin” prevents the entire concept from taking off. But then it occurs to me that cleaning and moistening the skin pre-reading is so common that every nurse does it before every test. And I’ve heard that it’s just downright too difficult to make sensing of this sort produce accurate readings.

But then I realize the truly radical part: The readings don’t have to be accurate to be effective. They just have to be reliable enough to illustrate the most general of trends at the individual level. Apple isn’t trying to build a proper diagnostic machine to compare people against other people or established medical baselines. They simply want to let consumers have an accessible, inexpensive, and reasonably reliable means to monitor their own internal fluctuations as they themselves see fit. Heck, I haven’t got diabetes, but I’d sure like to get a feel (without being pricked in the fingertip every few hours) for how my glucose levels change during the day. A disclaimer before use should be sufficient to underscore that Apple Watch is not intended to be a diagnostic tool or a substitute for FDA-approved medical devices. Preventative maintenance is rarely FDA-approved. A trip to your local vitamin store will tell you that.

Plus, the FDA doesn’t regulate “non-medical” heart rate monitors and many similar devices, and there’s little reason to believe that Apple would be truly derailed in such a seemingly trivial battle of semantics. If Apple Watch is a “non-medical” glucometer, great. If it’s a “non-medical” BAC display, wonderful. If it’s a “non-medical” ballpark estimate of my blood pressure where the alternative is that I simply don’t check my blood pressure at all, I’m all in. If Apple Watch can use its heart rate tracking and microphone capabilities to tell you when you wake up from your unconscious snore-fest that, “Hey, you might have sleep apnea, so make an appointment with your doctor,” then the thing would be worth its weight in gold (provided we’re not talking about the 18-karat Apple Watch Edition).

All that aside, there’s one other very good reason why Apple has not — and will not — “abandon” its plans for its big heart rate monitor that could (do everything else): subsidies.

You know how Apple is able to sell tens of millions of iPhones each quarter? It’s because people, by and large, don’t have to pay full price for the things. Telecom companies buy them and make them available at sub-manufactory prices as a hook to sell their customers on expensive, long-term subscriber plans. That’s the only reason why iPad sales are so soft in comparison: There isn’t a consumer infrastructure in place to subsidize them. Apple needs another cash cow, and what better players to get on board than those comprising America’s largest consumer industry?

Getting into the home healthcare market with a product like the one described above — and finding an entrenched, established financial foundation to subsidize the thing — would propel Apple well over the threshold of its long-courted trillion-dollar valuation.

In a few years’ time, you might be able to get a brand new Apple Watch from your healthcare provider just like you’ll get your iPhone upgrade from AT&T. Sure, the plan to cover it might cost a little more, but you’ll probably think it’s worth it.

And Apple’s banking on you being right.

Ultimately, I still think health monitoring — not mere fitness monitoring (no, sitting is not the new cancer) — is Apple Watch’s primary raison d’être. I don’t think they abandoned any aspect of their plans whatsoever, nor do I think version one of Apple Watch’s “heart rate sensor” is going to be allowed (by Apple, not some government entity) to do much of anything beyond the barebones basics. Why else would anyone get the next one?

And Tim Cook has been very clear that Apple Watch is a long-term play.