You are using an outdated browser. Please upgrade your browser to improve your experience.
by Abdel Ibrahim
September 7, 2016

Apple today announced the next-generation Apple, dubbed the Apple Watch Series 2. While the Watch may look very much like the first generation, Apple has upgraded various parts of the Watch, making it quite a heck of an upgrade.

Let’s take a look at some of the major features announced.

Swim-proof: water resistant up to 50 meters

This is a big upgrade for anyone who is a swimmer or simply plays or works around a lot of water. While the first-generation Apple Watch was technically water resistant, Apple shied away from calling it such. With Apple Watch Series 2, Apple is not only emphatically calling the Apple Watch water resistant, it’s telling people to swim and surf with it.

Perhaps the craziest part of the Watch is that Apple has designed the speaker to do something pretty remarkable: eject water out of its cavity after it’s been in use. Basically, if Apple wanted to achieve the water resistant they wanted, they needed to make sure the absolutely no water got into the Watch chassis. This engineering ensures this and is honestly quite remarkable.

The S2 system in a package (SIP) is perhaps something people will notice the most about the next-generation Apple Watch because it will allow the Apple Watch to run 50 percent faster than its predecessor. Between that and and watchOS 3, my bet is that this Watch fill feel lightning fast, something we all come to appreciate. A 2x faster GPU will also make things like video and animations runs much smoother. Win!

Who doesn’t want a brighter display? This is going to help so much with making it easier to read information in bright sunlight. A very welcomed change indeed.
Built-in GPS with pace and distance for workouts

GPS is huge for those who are active outdoors. If you’re someone who plans on going on runs or bike rides and would rather not take your iPhone with you, the GPS in this new Apple Watch ought to solve your problem. Not only that, but my guess is that it’s going to make tracking everything from walking to running much more accurate.
Aluminum, stainless steel, ceramic (white) options 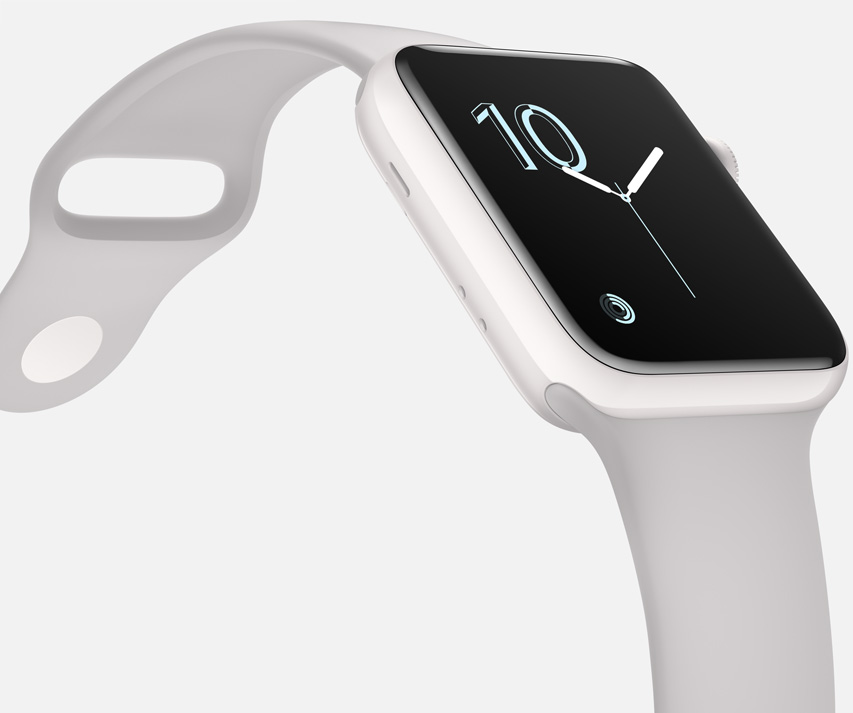 Apple has done away with the “Sport” and “Apple Watch” naming, but has kept around the “Edition.” Now, Apple simply names them either Aluminum or Steel and a new ceramic material has replaced the gold and rose gold models for the “Edition.” The Aluminum starts at $369, a $20 jump when compared to the first-generation Apple Watch Sport. The Steel maintains its $549 starting point and the White Ceramic “Edition” model starts at $1249.

I’m sad Apple didn’t add any new Watch faces to the Series 2. That seemed like low-hanging fruit. I’m also sad that Apple did not add an always-on display, something that I think would greatly improve the experience of the Watch. That said, I’m guessing Apple reworked a lot of the components on this new Watch and they simply didn’t cover it in the keynote. Things like the gyroscope and Taptic Engine are likely improved, at least I hope.

I was also hoping for a lower entry price. That said, Apple did do something that I think will help them sell many more Watches and that’s putting the S2 into the first-generation Watch. At a $269 starting price, I think that’s going to be quite compelling to a lot of people, especially for someone who doesn’t need some of the workout features Apple has added to the Series 2.

I’m quite happy with the upgrade and for anyone who was looking for a decent upgrade to the Apple Watch, I think this is it. What I call this a must-have upgrade if you have the first-gernation? I guess it depends on what you used the Watch for. If it’s for working out, I’d say yes. If it’s for casual things like notifications and such, I’d say watchOS 3 has you covered.