You are using an outdated browser. Please upgrade your browser to improve your experience.
by Andy Faust
December 31, 2015

When Apple Music first launched, I signed up for the trial to get a load of the service’s selection. At first, I was not impressed. There was no King Crimson, no solo Belew, no Tool. But there was plenty of Leonard Cohen and FYC and Spandau Ballet and China Crisis, so it grew on me. Still, I figured I probably had better things on which to drop 10 bucks a month, and it wasn’t until I started using my Apple Watch to control Apple Music that it really became compelling — especially in the gym. So I renewed. And renewed. And renewed.

I cancelled my membership yesterday.

Now, I know I’m hard on my newfangled wearable, but my complaints are genuinely mine, and I’m happy to share them. I spent a lot of cash on this thing, and I expect it to live up to a certain set of standards, first-generation issues notwithstanding. Fortunately, this particular complaint isn’t really about Apple Watch. Not directly, at least.

No, this complaint is about Siri. Siri is a chump. Siri is the worst product Apple’s developed in a decade or more, and it consistently fails to get anything right. Since Apple Watch — and thus my use cases for Apple Music — rely so heavily on it, the experience has been hit or (mostly) miss. I was willing to put up with some of the quirks for a while, but as the problems became more and more basic and obvious, they became more irritating and unacceptable. Tell Siri to “play Wanna Be A Baller,” and you’ll get a terrible, eardrum-crushing remix. Add “…by Lil’ Troy” and you get the correct ridiculous song. I could live with that. When I wanted to play the album Dookie by Green Day, Siri couldn’t find “Dukie” in the Apple Music song library. Well, no s*** she couldn’t. But I chalked that up to a cataloging error.

It wasn’t until the other day when I was blasting the treadmill and wanted to hear Sublime by Sublime that I got really irked with the service and its idiot robot handler. The album started up just fine, but as I neared the end of my workout, I thought I’d go with my (and everyone’s) favorite song from the album. Thus, I instructed Siri to “play track six.”

At which point, instead of Santeria, I heard some garbage song off the “free” U2 album Apple shoved down my throat a while back (which was and remains deleted from my phone). 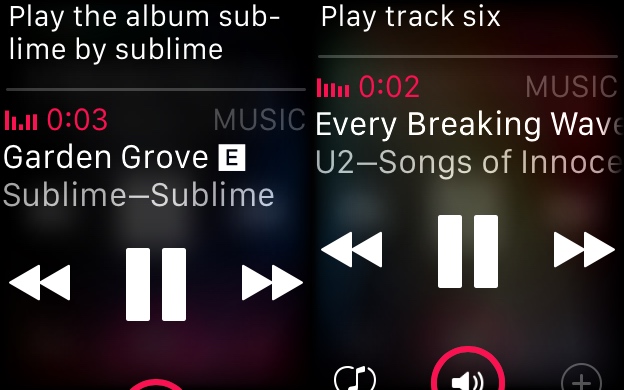 Yep, instead of playing track six of the currently-playing album (which is obviously what I was asking for), I got to hear the self-righteous whining of an aging Bono. I assumed this was a skeezy marketing trick by Cupertino’s coders, but it turns out it wasn’t. I tried the same scenario with a different album on Apple Music, and when I asked for a specific track, I got some other random thing from some other random record. My gal tried this on her Apple Watch with the same borked result, and our iPhones — both updated — do the same thing via Siri onboard.

So while Apple Watch itself isn’t really the culprit here, the device is literally the only reason I kept paying for Apple Music. Without that (which, after fitness, has become the top use case for my 42mm Sport), I just can’t justify keeping it. Using Apple Music on Apple Watch has become so annoying and disjointed that, for my needs, the service is rendered moot.

Admittedly, though, these basic failures are a concern I have with Apple’s wearable platform and overall approach going forward. In addition to processing boosts and useful third-party apps and Faces, Apple Watch needs some kind of reliable input mechanism. Siri has failed to meet that standard time after time, and I dont see QWERTY or T9 in the near smartwatch future. So that means I’m stuck with the lady, and that bothers me. I dont particularly want to talk to my wrist wear to begin with (emergencies excepted), but that seems to be an inescapable platform reality.

I dropped Apple Music because Siri sucks. It would be a shame to have to drop my Apple Watch for the same reason.