You are using an outdated browser. Please upgrade your browser to improve your experience.
by Andy Faust
November 9, 2015

One of the few actual conveniences of Siri on iPhone has not been carried over to Apple Watch, even though all the parts are there. In what I can only imagine is a glaring oversight on Apple’s part, the computer giant has neglected to bake Shazam access directly into Apple Watch’s native voice control system.

On iPhone, when you hear a song you need to ID, all you’ve got to do — even from the lock screen — is depress the home button, ask Siri “What song is this?” and wait for a response. This, of course, is powered by Shazam (results even include the requisite branding), and it’ll work whether or not you actually have the Shazam app installed on your handset. In other words, on iPhone, the Shazam service is integrated into iOS itself: 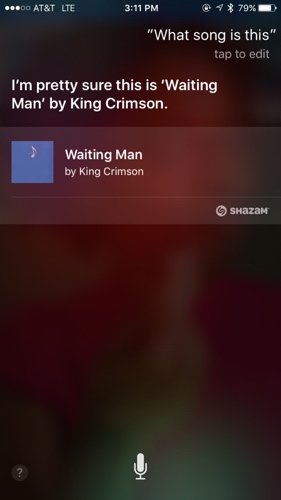 Tying this in with Siri controls makes the process much faster and more effective (especially if you’re tagging the end of a song), and that concept makes even more sense at the wrist where time and efficiency are even more pressing. So you’d think this would actually work better on a platform you haven’t got to pull out of your pocket to get going.

Alas, that’s not the case: 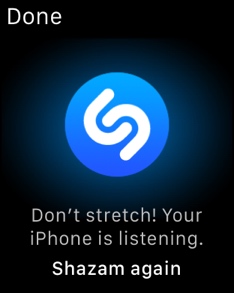 “Don’t stretch”? Dont stretch what? And whatever that means, it’s hardly in the spirit of the wearable, making the experience incredibly time-consuming and annoying. More troubling still is the fact that, four times out of five or so, I get the above error message, even when I try to tag the same song with the same Apple Watch at the same distance from the same audio source (which, naturally, is set to the same volume). There’s simply no telling when Shazam on Apple Watch will even work. Plus, when it does, I rarely even get the album art, settling instead for an unsightly gray rectangle taking up half of my Apple Watch screen. Ultimately, the ugly endeavor isn’t remotely worth it.

Shazam should have been a no-brainer on Apple Watch.

And since it’s totally mindless, I guess in some ways it is.