You are using an outdated browser. Please upgrade your browser to improve your experience.
by Andy Faust
June 11, 2015

Back before WatchAware actually launched, we lowly scribes wrote a number of test articles to give our design team something to work with. And since lorem ipsum dolor sits a mite low on the utility scale these days, we went ahead and wrote a few things of actual substance. Most of those, of course, haven’t seen the light of day, as they tended to be news articles badly dated — to the point of irrelevancy — by the time the site went live.

One of my unpublished essays, however, was called “The Vitruvian Smartwatch,” and it’s still applicable. Unfortunately, I didn’t hang on to it, but it’s easy enough to summarize. Essentially, the article was about the broken proportions of trying to “circle the square.” In it, I wrote that the round-faced smartwatches favored by Android Wear are handcuffing themselves (as Apple Watch is with its Digital Crown, but to an exponentially larger degree) by clinging to an outmoded and unnecessary metaphor based on criteria that simply don’t exist in the digital age. They are embracing the circular display because analog timepieces — from the sun dial on up (excepting the hourglass) — have always been circular by functional necessity.

That said, I actually rather like that Wear vendors are sticking (mostly) with this approach. It will continue to be a valuable design differentiator from Apple Watch, and it will always be a major sales driver for both sides of the competition. And while circular smartwatches have a number of functional shortcomings compared against Apple’s diminutive mobile (including needless manufactory complexity, wasted internal space due to square-shaped components, prominent bezels to disguise jagged panel edges, smaller battery capacity to unit size ratios, and — to compensate for all this — enormous, decidedly non-unisex-friendly cases), design undeniably matters for wearables. A consumer who insists upon a round smartwatch is every bit as inarguably correct as one who sings that it’s hip to be square. You can’t argue aesthetics.

My problem with round smartwatches, then, has nothing to do with looks. (I think they generally look decent enough.) My problem also has little to do with their many technological shortcomings. Instead, my problem with these things is simply that, in choosing to go around in circles, their manufacturers (and Google itself) are basing said decision on the wrong tradition.

There is, in fact, another valuable, historical device predicated on portable roundness, and it’s arguably a more important and mission-critical implement than most wristwatches — for most folks — could ever hope to be. To me, that’s the device that Apple’s smartwatch competitors should embrace in selling their round wares. It is more apt, it is more translatable to contemporary times, it is more impactful, it is more dynamic.

It is the compass.

I’m certainly not the first person to have this idea (though I have yet to come across it posited elsewhere), and I harbor little doubt that the various R&D departments at Apple et al. have flirted with the metaphor themselves. Maybe many still are. And if they’re not, I hope at least one big player revisits the idea and pushes it hard.

Because round-screened smartwatches have so many demonstrable drawbacks compared against Apple’s squared solution that this compass-driven concept could be a veritable coup for hordes of also-rans. Apple Watch could never replicate the functionality I’ve got in mind, and should the company ever be fool enough to try, they’d be panned as having lost their heretofore lauded design instincts. Physically and philosophically, this is one thing — perhaps the only thing — that only works with circular displays.

But before I tell you exactly what the heck I’m talking about, here’s the TL;DR to the above build-up:

Round Android Wear (or other) smartwatches are at an almost complete feature disadvantage to Apple Watch. Except one. Yet if they continue to position their circular screen approach as predicated on traditional analog watch design cues, they’ll never be able to play their sole trump card upon Apple’s (overflowingly) green table. They must get their bearings right and move forward. They must forget the timepiece, and they must embrace the compass.

To understand what I mean, just put on a wristwatch. Now glance down at your wrist, as if checking the time. Don’t exaggerate things — just twist your arm towards yourself in that standard, natural motion you’re used to. More likely than not, you’ll notice that your watch probably isn’t oriented in the easiest-to-read manner. For analog or basic digital affairs, this is hardly a problem, as you’ve long been conditioned to read simple watch displays even when viewed from various off-center positions. If you’ve ever been driving with both hands on the wheel, this effect is even more pronounced, but you likely needn’t risk losing control of your car to check the time. It’s easy enough to glean such a limited amount of data from just about any angle of presentation. In fact, the one way most folks probably don’t look at their watches (or, at least, don’t usually want to) is this way: 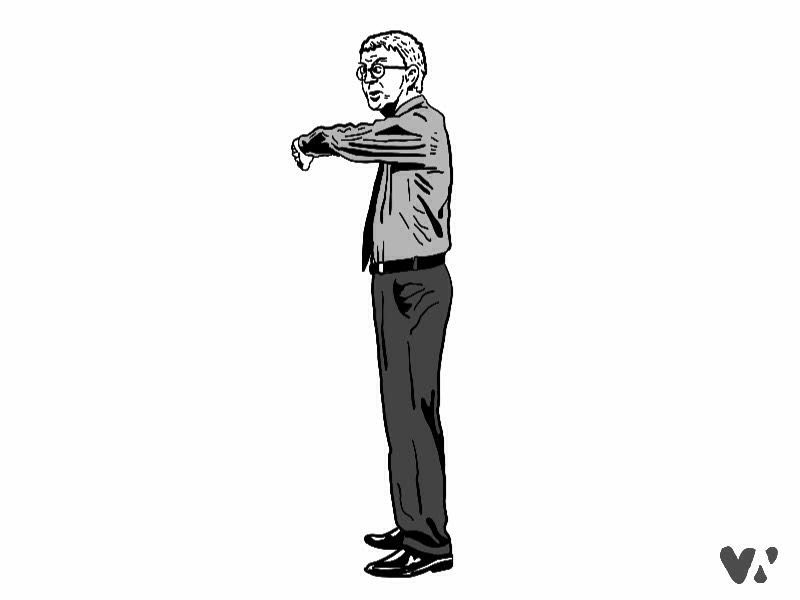 On a smartwatch, however, checking the time is but a small part of the use equation. Most of the data that such devices serve up is far more complex — and far more character-dense — than a dozen numbers around a couple of ticking hands. You might get a notification some several sentences long, or you might view a map that makes a little less sense when its cardinal directions don’t match up with your internal reference points. Nobody looks at a map sideways, after all. To compensate for all the extra information a smartwatch presents, then, more folks will be more often beholden to the uncomfortable postural inefficiencies pictured above.

With Apple Watch (and other square-display devices), this is almost unavoidable. Or, at the very least, it’s less unavoidable than it should be. Glances are meant to be glanced at, discreetly, often askew, and almost never vertically in front of your face. With a squared screen, though, there’s really no getting around it. Sure, you’ll eventually learn to read sideways and ultimately avoid dealing with longer missives at the wrist to compensate, but the limitation is an inbuilt detractor that isn’t realistically negotiable, no matter what watchOS revision comes down the line.

With Android Wear’s circular approach, however, this can be wholly alleviated by what I’ll call the “Compass UI.”

Don’t get me wrong — I’m not thrilled with Wear’s looks or implementation from an aesthetic standpoint, and I think its reliance on white/light backgrounds throughout navigation are a major detriment to both form and function. (It should be noted that white pixels require less power during activation in LCDs, which might explain this color scheme, at least when it was initially developed. Most Wear devices didn’t start out housing expensive OLED panels, where the exact opposite is actually true, and I suspect Google will go darker once OLEDs become the industry standard.)

But the benefit to a circular display is that the entire display can rotate without any data loss — just like the inside of a compass. This means that, once calibrated with your head-level as “north” (you are a star, after all!), the UI will always know where your smartwatch is in relation to your eyeballs. And exactly as a compass always points north, your smartwatch display will always balance itself for maximal viewing, allowing for centered, left-to-right (or right-to-left) reading no matter how off-center your wrist happens to be. No more turning and twisting your head like a chump! (The calibration shouldn’t be complex, either. You’d simply hold the device up to your face in a vertical manner, follow a few prompts to move your arm here and there, and manually make minor adjustments to the amount of display “spin” as needed.) 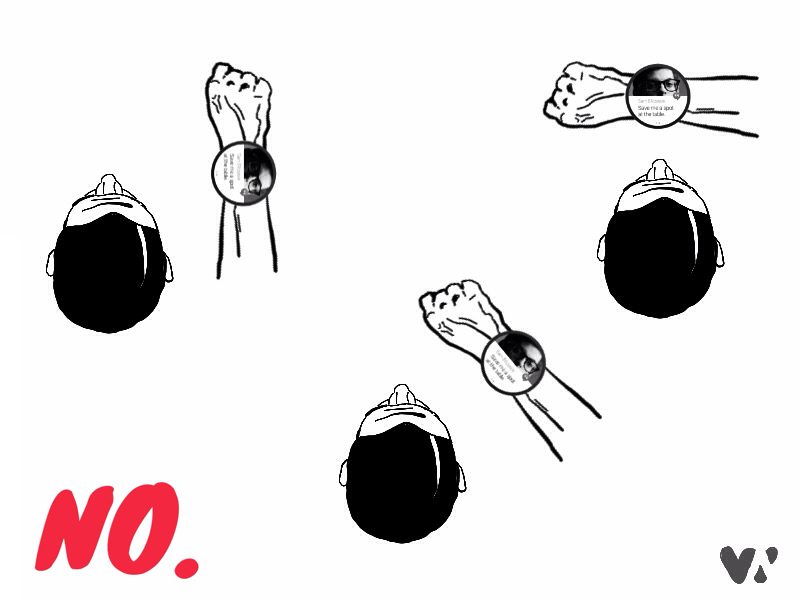 With this approach, a round-faced smartwatch would always treat you as if you’re the center of its world. And that’s how it should be.

Unfortunately, Apple Watch can’t do the same thing. Rotating a circle within the square display would be doable, but at a huge cost to available pixels. Plus, for most applications, it would be utterly unworkable anyways. Nobody’d what a square rotated 45 degrees inside another square. Additionally, since Apple uses that silly Digital Crown as an input mechanism, you’re more or less locked into a (mostly) front-and-center experience. On a Wear device running a Compass UI and relying on swipes alone for navigation, this is a non-issue. (Samsung’s rotating “Orbis/Wear A” bezel would also work well in this context, although I doubt that particular input mechanism will prove to be a hit in the real world.)

So, to me, there is, at least, a single technological benefit to the round smartwatch that Apple simply isn’t able to match.

Is it totally necessary? Of course not. But it would be useful, convenient, fun, and a definite selling point in its own right, and I think Android Wear manufacturers (and makers of non-Wear round smartwatches, like Samsung) should take a serious look at the idea. Yes, it’d likely constitute a hit to battery life and tax the graphics drivers a bit, but it’d be optional (or optionally modified/slowed/paused/disabled based on the software’s situational awareness — you wouldn’t want the screen shifting around when you’re actively touching it), and I’m guessing lots of folks would think it’s pretty darn neat. I sure do.

Google is going to have to differentiate to stay up to speed in the smartwatch race. There’s no doubt about that. Implementing an idea like a dynamic, floating, compass-like interface is just one way to do so, but it’s the most straightforward, radical, showcase thing they could do in the short term on the software end.

Android Wear, as a platform, is on a journey. It can either go north or south. I hope Google chooses the former.

And I also hope Apple puts a Compass app on Apple Watch because it should’ve been there from day one for crying out loud.