You are using an outdated browser. Please upgrade your browser to improve your experience.
by Jason Shah, CEO of Do (Do.com)
May 12, 2015

[Editor’s Note: Jason Shah, CEO of Do (Do.com), wrote this article shortly before the launch of Apple Watch late last month. His predictions of a wearable workplace powerhouse are increasingly apt as Apple Watch makes its way into offices around the world.]

The iPhone and iPad changed how we work. So will the Apple Watch.

The Apple Watch is coming. On April 24th, Apple will unleash its newest platform, destined to change how we live and work — the same way the iPhone and iPad did before it. While speculation about consumer interest and killer apps for the Apple Watch swirl, it’s apparent that the Apple Watch and wearables will forever change the way business is done and have a significant effect on the enterprise market. We may have been justified in our skepticism in 2007 when the iPhone launched, or even in 2010 when the iPad launched. But in 2015? Fool me once, shame on you; fool me twice, shame on me.

In a world that has already embraced BYOD, cloud, and connected APIs and devices – this is inevitable. Smartphones meant we were always connected. Tablets meant new ways to get work done – be it a presentation or taking meeting notes. The Apple Watch will take advantage of our always-connected work lives and become a high-leverage, ubiquitous work tool, changing how we do business in three fundamental ways.

The Apple Watch will speed up work.

People have already declared that notifications will be the killer app for Apple Watch. Ignore for a moment that the Watch hasn’t launched and that knowing what will eventually be the killer app is impossible. Given that the Watch is so nascent, this would be like predicting that the camera would have been the iPhone’s killer app when that was far from apparent in 2007, when the iPhone launched, digital cameras were all the rage, and there was no App Store.

Notifications will be immediately visible to us. Watch Apps are tailored around one-tap behaviors such as approving an expense report or sending a canned reply to an email. Combine this availability of information with ease of acting on said information, and we will see faster communication cycles, meaning we get more done in less time. Whether we’ll struggle to stay engaged is an open question. But businesses able to make simple, otherwise-time-consuming work fit this accelerated workflow will gain a competitive advantage over those stuck in slower, more cumbersome business processes. And where a competitive advantage exists, we can expect businesses to flock. Those unable to adapt, eventually will fall behind and be eliminated. We saw this happen with smartphones enabling faster responses and will only see the cycle continue with wearable enterprise technology. 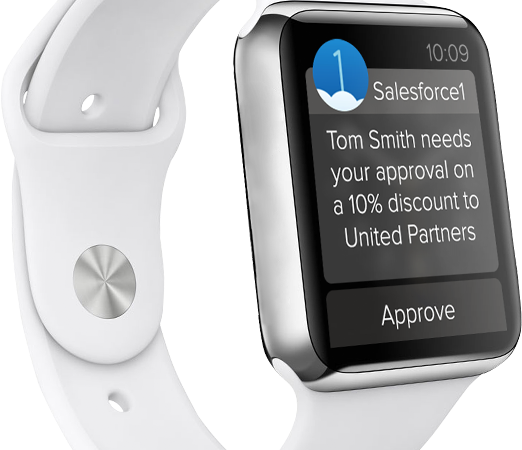 The Apple Watch will make us even more data-driven.

Sometimes, we are slaves to technology. In the early 2000s with our Crackberries and eventually iPhones, we put emails on smartphones and what a fateful decision that was. Today we send more emails than ever. What a technology allows and promotes, we are likely to further embrace if we adopt the technology. Said differently, would you be as addicted to your smartphone if it didn’t have email on it? Probably not.

This is why the Apple Watch’s enablement of data visualizations is especially interesting. From Apple’s native fitness apps to 3rd party apps like the Salesforce Analytics Cloud app, attractive and informative data visualizations are clearly important to the platform. Data visualizations pack massive data sets onto a small screen. Apple Watch animations bring the data to life. Viewing data doesn’t require input on the Watch itself, allowing us to sidestep what would otherwise be perceived as a limitation of the Watch compared to smartphones with keyboards. 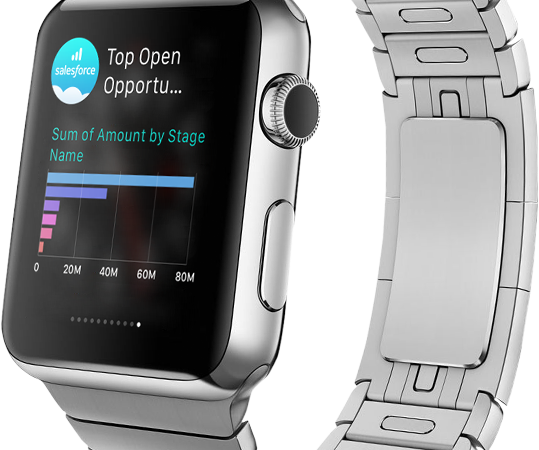 When you consider how the Apple Watch supports data, we’ll be constantly checking our sales data in the Salesforce1 Watch app, our social media analytics in the Twitter or Buffer apps for Apple Watch, and the effectiveness of our advertising spend in a Google AdWords app. Imagine how a salesperson – not just a sales executive – might drill into “how many open service cases that company has, how many open deals it has right now, and what’s the projected value of those deals?”. Data is knowledge, and knowledge is power. As a startup founder, I know all too well how easy it is to get addicted checking metrics in Mixpanel, Intercom, or Mode. This will only accelerate as executives use the Watch as a primary business tool and push on the metrics that they can monitor most easily at a glance.

The Apple Watch will blur the already-blurred lines between personal lives and work lives.

We already have apps like Slack and Facebook sitting side-by-side on our smartphones and tablets. Scroll through your Facebook Newsfeed only to be interrupted by a push notification that Bob in engineering needs product input from you. So you double tap the home button, switch to Slack, send a reply, and back to Facebook-stalking you go. 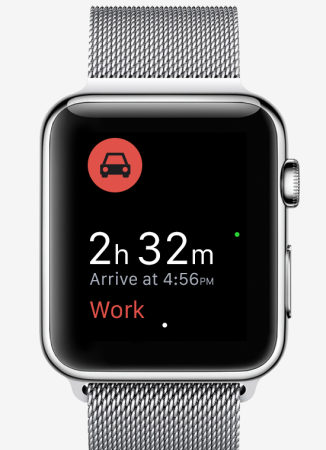 The separation between personal and professional hardly exists anymore – we used to have a PC that was at work and we’d come home and have dinner in peace. Then laptops made it easy to take your work home. Then the web and websites made it easy to check your personal email from work through the browser. Then smartphones made it impossible to make it through dinner without your Blackberry buzzing you. And now the Apple Watch will make it so that work is with you when you’re running at the gym or sleeping peacefully. Notifications will interrupt meals, with quick-actions making it even more appealing to “just get through this, real quick.” Glances will serve our workaholic mindsets and feed us the constant source of work data we crave. Our wearables will always be with us, forever challenging the concept of work-life balance, and perhaps demanding an entirely new concept to describe the relationship between our work and personal lives.

It’s a matter of when. Not if.

We function in a capitalist society. What is good for business and returns profits drives our behavior at work. The Apple Watch makes employees more aware, more effective, and ultimately more productive at work. That is the rationale behind any enterprise software, and it’s no weaker of a rationale for the Apple Watch. One can make arguments about consumer demand, human distraction, or enterprise security, but these arguments have been made before and frankly only time will tell.

Summary: The Apple Watch will have as large, if not larger, of an impact on the workplace as did the iPhone and the iPad. Given its ubiquity, notifications, and quick-interaction model, the Apple Watch is a powerful tool for work. It will speed up work, make us more data-driven, and will further blur the lines between personal and professional.