You are using an outdated browser. Please upgrade your browser to improve your experience.
by Andy Faust
April 23, 2015

Apple’s introduced a new icon in its App Store for any iPhone app that’s already been updated to support Apple Watch. Here’s what that looks like: 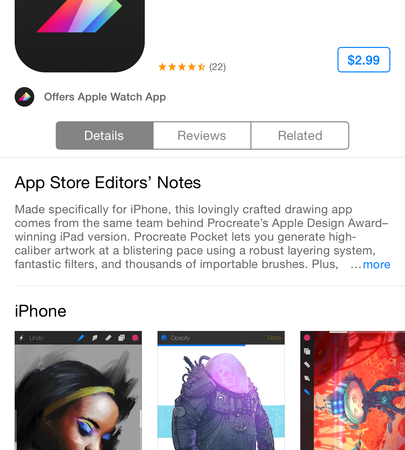 Curiously, it’s a bit obtrusive when compared against the familiar “plus” sign that designates universal iPhone/iPad offerings, and I was expecting some addition next to that, like maybe a circular “watch face” symbol or similar. Of course, that might be too unobtrusive for Apple’s liking, and it probably serves the stuttering Apple Watch rollout a little bit better to have these extensions listed boldly under their main icons on iPhone. And this way, you get to see exactly what the Apple Watch version’s icon looks like without loading it up on your wearable first. That’s something, I suppose. But if you want to see what those apps will really look like on your wrist, you’ll need to check out our new searchable Apps repository, where we’ve got every single approved Apple Watch app available for your browsing pleasure.

On a cursorily-related note, here’s Procreate’s iPad app as listed in the App Store: 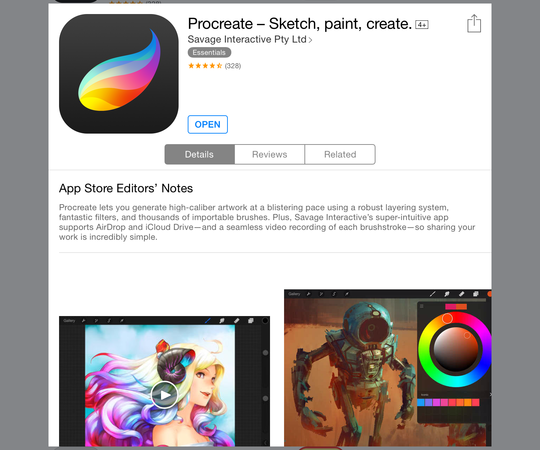 Notice that this version — the real version — of Procreate doesn’t include Apple Watch support, because Apple’s not allowing such at the outset. For lots of apps, that probably doesn’t matter so much, but Procreate for iPad is the best mobile drawing experience of any kind on any platform, and the Apple Watch extension is a clever little palette handler that would be infinitely more useful in conjunction with iPad than iPhone. Procreate Pocket is okay, but it’s quite a lot less capable than the iPad version, and this is Exhibit A for why Apple needs to open up iPad support to Apple Watch as soon as possible.